Chinese medicine is based upon the observation of nature. The Tao,  the way of nature,is at the heart of Chinese philosophy with the principle of Yin and Yang at the root of the belief. In the symbol of Tao, we see that black and white aspects are in perfect balance. 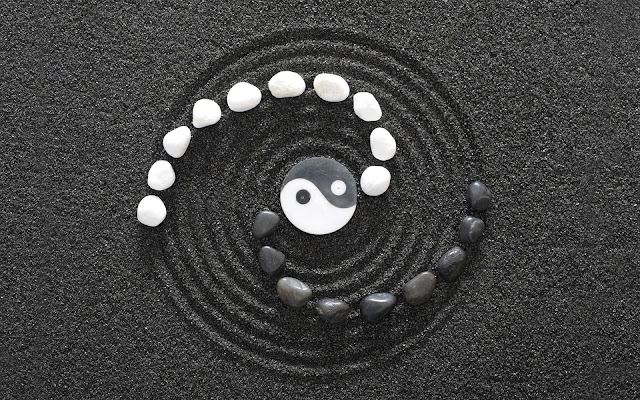 The fact that the image is a perfect circle really makes absolute sense. The universe runs in circles, creates circles. Our Earth is a sphere, Its orbit of the sun is circular, the galaxy revolves as a circle. The earth rotates on its North-South axis in a circular pattern. Everything spins. “The whole world is just a circle without a beginning, nobody knows where it really ends”.

But the interesting thing about the  Yin and Yang symbol, is that in the centre of each part there is a smaller circle, which is in the opposite colour telling that the world is not just a partition of opposites against each other. Within each the Yin and the Yang there exists the seed of the other. This is absolute observation.
When yin becomes thinner, yang becomes stronger. If you look further, you will see there is a white circle in the yang and a black circle in the yin, thus signifying the duality of nature that exists in all forms. The Chinese don’t believe in absolute or ideas: everything is relative,flexible, and ever changing.Within yin, there is yang. within yang there is yin. This is the ever changing phenomenon of all living beings.
Cold is seen as yin in nature, but at the extreme of cold, there is heat- as in dry ice which can burn. Conversely, a fever, which is yang, can cause shivering. This is the balance that the body naturally tries to achieve from moment without our effort or awareness. But in illness, this harmony is disrupted.In Chinese medicine, we try to re-establish balance through lifestyle,changes,diet,herbs and acupuncture.

Everything in life has opposites: Yin-Yang.

The ancients believed that what nature is composed of, we are composed of. Each human being is a microscopic part of the macrocosm. We have within us the five elements or phases: earth, metal, water,wood, and fire. Each of these elements has a personality and an internal milieu connected with who we are.No aspects of  person functions as an independent, discrete entity. Each physical function is connected to an emotional aspect. Each governs an organ,sensory perception or season. There is an interplay between them that our physical and emotional relationship in balance.

“Accept your dark side, understanding it will help you to move with the light. Knowing both sides of our souls, helps us all to move forward in life and to understand that, perfection doesn’t exist.” –