Trouble Relaxing in Shavasana? Here’s a Simple Practice that Can Help

What if you can’t relax—even after lying in the corpse posture for ten minutes? Unwinding is easier said than done—especially when you’re hyped up on coffee, negative emotions, hectic schedules, looming exams.

Maybe you know this scenario: your body is settled in shavasana, but your mind is up and running—fighting traffic, or revising a fight you had with your husband (this time, you win). Vaguely, you visualize your breath sweeping from your head to your toes and up again, but mentally you’re miles away. At some point, you stop drifting and notice: your abdomen is locked, your hands are clenched in fists, and your shoulders are hiked up to your ears. What happened?

The problem is that you’re going through the motions with a hyperactive mind. As a result, you can’t give the relaxation process the attention it needs to work its magic. The key to success? Focus on the breath. According to the yogis, it’s the bridge between body and mind. Chances are, if you focus on breathing slower, deeper, and without pause, you’ll quiet your mental chatter and calm your nervous system. Then your mind and your muscles will surrender naturally.

Start over: Lie on your back in shavasana (the corpse posture) with a cushion under your neck. Place one hand on your abdomen and one on your chest. Before you have a chance to think, tune into the movements of your body as you breathe. Notice the feeling of your breath emptying your lungs as you exhale, and filling them as you inhale.

Before you have a chance to think, tune into the movements of your body as you breathe.

Next, check to see if your chest is moving. If so, relax your rib cage and focus on breathing solely with your abdomen. Let the inhalation and exhalation be approximately equal in length.

Gradually deepen the breath and slow it down: On your next exhalation, gently engage your abdominal muscles and push a little extra air out of the lungs. Then, let your abdomen rise slightly higher as you inhale.

(It might be helpful to count your in and out breaths in even ratios—starting, perhaps, with 3:3, then moving up to 6:6—whatever is within your comfortable capacity.) Focus on this exercise for several minutes.

Then begin to weave the breaths together, reducing and smoothing out the pause between inhalation and exhalation. Imagine the movement of a car on a Ferris wheel, and apply its cycle to your breath. As you inhale, visualize the car ascending. It slows and levels off at the top of the ride, and merges smoothly into the descent as you exhale. At the bottom there is another leveling off, and the car rises again, smoothly, in the next ascent. Work with this practice for a few more minutes. As you settle into deeper breathing, your thoughts will begin to fall away as you embrace the present moment with a sense of comfort, peace, and ease.

When you are ready to come out of shavasana, bring your revitalized breath (and nervous system) with you. Roll onto your left side and stay there longer than usual (don’t pop up, give yourself a head rush, and run blindly to your next destination). Take several of the same slow, deep, unpaused breaths here. Then sit up slowly and prepare to greet the world.

Try this 5-move yoga routine to relax your body and mind before sleep. The best part? Each pose can be done in bed!

Forget counting sheep. Ease your way into dreamland with this five-move yoga routine from Edward Vilga, creator of the DVD Yoga in Bed: 20 Asanas to Do in Pajamas. The moves will relax your body and mind, but the best part is that you can do them all in bed! 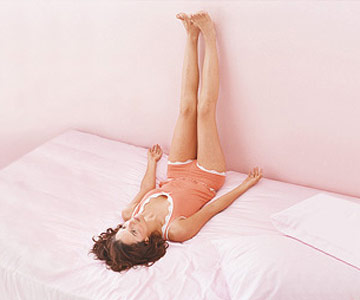 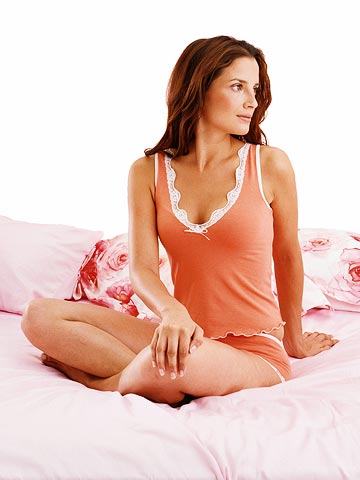 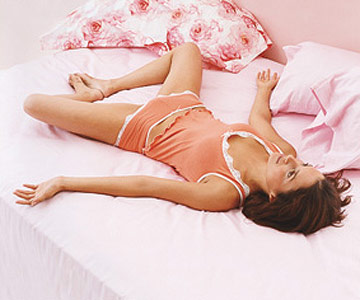 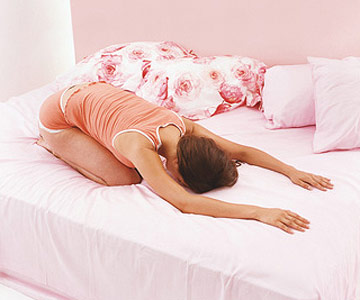 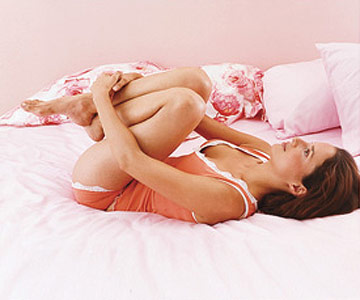 Are hormones making us feel hungry and full? – Thousand Thoughts

The need to find fuel to generate energy is a profound drive within the biology of all living organisms: we all need food to survive. So it’s not surprising that our bodies have such a complex system to control food intake, driven by hormones.

Hormone levels also change when we lose weight. As much as we battle to trim down via diets and eating patterns, they’re also the reason most of us will regain the weight we lose – or more.

The body’s system for regulating food intake is coordinated by the hypothalamus, which is located under the midline of the brain, behind the eyes:

Within the hypothalamus are nerve cells that, when activated, produce the sensation of hunger. They do so by producing two proteins that cause hunger: neuropeptide Y (NPY) and agouti-related peptide (AGRP).

Quite close to these nerve cells is another set of nerves that powerfully inhibit hunger. They produce two different proteins that inhibit hunger: cocaine and amphetamine-regulated transcript (CART) and melanocyte-stimulating hormone (αMSH).

These two sets of nerve cells initiate and send hunger signals to other areas of the hypothalamus. So, whether you feel inclined to eat or not depends on the balance of the activity between these two sets of neurons.

But what determines which set of neurons dominates at any given time?

The activity is mainly controlled by hormones that circulate in the blood. These come from tissues in various parts of the body that deal with energy intake and storage, including the gut (which receives and digests the food), the fat (which stores the energy) and the pancreas (which makes hormones that are involved in energy storage, such as insulin).

Hormones in the blood

Let’s take a closer look at how each of these blood-circulating hormones work.

Ghrelin is made in the stomach. It stimulates hunger by entering the brain and acting on the neurons in the hypothalamus to increase the activity of the hunger-causing nerve cells and reducing the activity of hunger-inhibiting cells. As the stomach empties, the release of ghrelin increases. As soon as the stomach is filled, it decreases.

Insulin-like peptide 5 (ILP-5) was found to stimulate hunger in 2014. It is the second circulating hormone to have this effect and is mainly produced in the colon. But we still don’t know its physiological role.

Cholecystokinin (CCK) is produced in the upper small bowel in response to food and gives a feeling of fullness. It is released soon after food reaches the small bowel. Researchers have found CCK can stop a mouse from eating as soon as it’s injected into the brain.

Peptide YY, glucagon-like peptide 1 (GLP-1), oxyntomodulin and uroguanilin are all made from the last part of the small bowel and make us feel full. They are released in response to food in the gut.

Leptin is the most powerful appetite-suppressing hormone and is made in fat cells. It was discovered in 1994. The more fat cells we have, the more leptin the body produces.

Amylin, insulin and pancreatic polypeptide are made in the pancreas. Studies in the United States have shown that when insulin enters the brain it inhibits hunger, telling the brain “there is enough energy in the body, take a rest”.

Amylin, discovered in 1981, is made in the same cells that make insulin (the beta cells). It has been shown to inhibit food intake.

The exact role of pancreatic polypeptide is not yet known, but there is evidence that it inhibits hunger.

The hypothalamus also receives signals from pleasure pathways that use dopamine, endocannabinoids and serotonin as messengers, which influence eating behaviour.

Once full, the stomach reduces the desire to eat both by lowering ghrelin production and by sending a message to the hypothalamus. Ghrelin levels reach a low around 30 to 60 minutes after eating.

Levels of hormones that make us feel full – CCK, PYY, GLP-1, amylin and insulin – all increase following a meal to reach a peak about 30 to 60 minutes later.

All the hormones then gradually return to their fasting levels three to four hours after a meal.

How weight loss affects our hormones

Several studies have found that diet-induced weight loss is associated with hormone changes that, together, promote weight regain.

Following weight loss, leptin levels decrease profoundly. Other hormonal changes include increases in circulating ghrelin, GIP and pancreatic polypeptide and reductions in PYY and CCK. Almost all of these changes favour regaining lost weight, by increasing hunger, reducing satiety and improving the capacity to store fat. These hormonal changes seem to be present for at least one year after weight loss, leading to a persistent increase in hunger.

These findings suggest suppressing hunger after weight loss – preferably with a replacement of hormones – may help people maintain their new weight.

Several of these agents have recently been approved by different regulatory bodies in the United States, Europe or Canada, but only one – liraglutide – is a version of one of the naturally occurring appetite suppressants (GLP-1). The ideal medication to maintain weight loss would be a long-acting mixture of three or more of the blood-circulating hormones we examined above: leptin, amylin, GLP-1, PYY, CCK and oxyntomodulin.

But producing such a mixture is proving a considerable challenge, so researchers continue to investigate how this might be done.

This article is part of an occasional series, Chemical Messengers, on hormones and the body.

Joseph Proietto is Chair of The medical Advisory Board for Liraglutide 3mg for Novo Nordisk. He receives funding from the NH&MRC.

Article by The Conversation

Striking it happy! Heartily congratulations to the golden and favoured stars of the Hrishikesh Fest Contest! Show some love to our winners: 1…